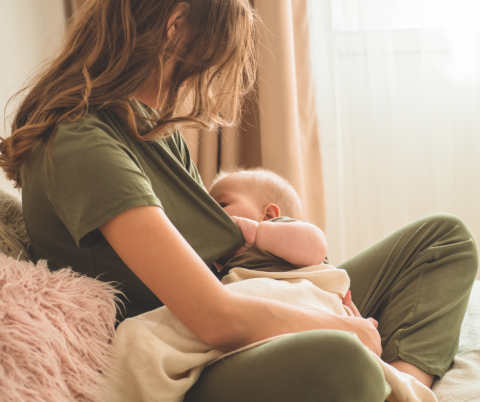 Published in The Medical Republic 12 May, 2022 https://medicalrepublic.com.au/does-domperidone-increase-breast-milk-production/68870

In the past decade or so, prescriptions for domperidone have doubled, particularly in high-income countries such as Australia, Canada and the UK. 1-3

In a survey of 1876 breastfeeding Australian women, 19% used domperidone at some time, and use was more likely in mothers of first-borns.4 A multi-country study of 1990 women found that most of these women stay on domperidone for between one and six months, a third for longer than six months.5

Dopamine, which also causes feelings of reward and pleasure, is one of multiple factors that downregulate prolactin production. It’s believed that domperidone binds with dopamine D2 receptors in the anterior pituitary, blocking dopamine so that prolactin secretion increases.

How safe is domperidone?

But domperidone should be avoided or used with extreme caution in breastfeeding women with established risk factors for QTc prolongation. This includes a patient who:

Do SSRIs increase the risk of QTc interval prolongation? Citalopram and escitalopram may, but sertraline doesn’t.7 In short, domperidone is not contraindicated for a mother taking sertraline.

A 2021 systematic review of 16 randomised controlled trials concluded that for mothers of preterm babies with low milk supply, domperidone increased daily milk volumes by 90ml on average, without significant side effects.

The longest clinical trial lasted 28 days, and the evaluations were mostly conducted over a 7-14-day period.8 There are inadequate data to show whether or not these increased volumes improve breastfeeding duration or infant weight gain.

Nevertheless, domperidone prescription is best practice in the care of mothers of preterm infants who plan to breastfeed. The breast requires high levels of prolactin to mature into lactation, and a preterm baby is generally born before this biological process has been completed. For most mothers of preterm babies, the potential benefits outweigh the potential risks.

That same systematic review concluded there wasn’t enough evidence to support the use of domperidone in mothers of term babies.8

Another 2020 systematic review agrees,9 as do the 2018 Academy of Breastfeeding Medicine guidelines.10 The only two relevant studies have been methodologically weak, conducted in the days immediately after birth, and of only one or four days’ duration.11, 12

From 30-40 hours after the birth, milk synthesis is predominantly under the control of the frequency and efficiency of milk removal.

Full milk production is reached by two weeks after the birth, and in pairs who are successfully breastfeeding, maternal milk volume is pretty much stable from when the baby is one month to six months of age.

The daily volume is consistent for each mother-baby pair, but highly variable between pairs, ranging from 490-1100ml in a 24-hour period.

The amount of milk transferred in each feed is also highly variable in successfully breastfeeding women. Prolactin levels decline throughout the course of lactation, and do not correlate with milk volume or rate of synthesis.

It seems unlikely that the mother of a term baby will increase her supply with domperidone use by 90ml/day, as occurs for the mother of a preterm baby, given that prolactin is not driving milk production after the first few days post-birth.

Even if maternal supply was to increase by 90ml/day, the extra five or so millilitres each breast per feed over a 24-hour period may be equivalent to some milk dribbling out of the baby’s mouth or a small puke or a letdown in the mother’s bra.

The calibration of milk supply to the baby’s need is a complex adaptive system, characterised by buffering and by protective feedback loops.

Plasma prolactin levels are about 10ng/ml in non-pregnant women. This increases during pregnancy, preparing the breast for milk production and peaking at more than 200ng/ml at the time of the birth.

Prolactin levels rise in a pulse after nipple stimulation and suckling. But baseline and peak levels are highly variable between women and do not correlate with a woman’s milk volumes or rate of milk synthesis.

In the first 10-90 days, baseline prolactin levels are in the range of 60-110ng/ml; between 3-6 months 50-100ng/ml; and beyond six months, at 30-40ng/ml. Women with low supply don’t usually have low prolactin levels. In the light of this information, it seems unlikely that increasing a mother’s prolactin levels will affect her milk volumes, let alone impact in a way that improves breastfeeding outcomes.

What do mothers who are breastfeeding term babies say about domperidone use?

Two qualitative studies (n = 22, n = 15) of Australian breastfeeding mothers confirm what I’ve often heard women say over the years in the clinic.13, 14 These women are not looking for a panacea or “magic remedy” but make the strategic decision to use galactagogues alongside various other strategies for increasing supply. They do this and are willing to risk side effects because breastfeeding their baby is very important to them.

The studies suggest that women turn to domperidone in large numbers because our health system is unable to effectively deliver accurate information and effective clinical support for lactating women.13, 14 They found that breastfeeding women:

What are the side-effects of domperidone?

As health professionals, we have a tendency to over-estimate the benefits of a pharmaceutical intervention, and to underestimate side effects.15, 16

Case reports have suggested we need to taper the cessation of domperidone because of the risk of side effects with sudden withdrawal.17-19

The Shen et al 2021 systematic review found no differences in side effects between domperidone and placebo. But a 2020 online survey of 355 breastfeeding Australians who’d taken domperidone found that 45% reported a side effect, and 23% reported two or more side effects. In fact, 9% of women stopped taking domperidone because of side effects. These side effects included weight gain (25%), headache (17%), fatigue (9%), irritability (6%), and depression (6%). Since there is little evidence of benefit, it is difficult to justify exposing women to the risk of these side effects during matrescence, when there is already  a biological predisposition to fatigue, hypervigilance and worried thoughts4.

Personally, I am reluctant to prescribe domperidone for a woman who is on sertraline. I prescribe domperidone when asked by other breastfeeding women at times, taking the relevant precautions. It will take one or two weeks for domperidone to take effect, if it is going to be effective at all, and in the meantime there are many other steps that can be taken to address supply concerns!

I agree with Zizo et al, who write:

“If women are allowed to have unrealistic expectations about domperidone use, this has possible negative impacts on maternal agency, confidence, anxiety and self-efficacy, with negative psychological sequelae.”14

Dr Pamela Douglas is an Australian GP, writer and researcher, with special interest in perinatal mental health and breastfeeding medicine. Over the past 20, she has published the evidence-base to the program known as Neuroprotective Developmental Care (NDC), which helps families who face breastfeeding, baby sleep and cry-fuss challenges.

Dr Pamela Douglas is a GP and Medical Director of Possums & Co www.possumsonline.com, a charity which educates health professionals in the evidence-based Neuroprotective Developmental Care (NDC) or Possums programs, including the Possums Baby and Toddler Sleep Program. (This program is now available inside Milk & Moon, our exciting new home for parents. Milk & Moon membership includes everything in the Possums Baby and Toddler Sleep Program, the Gestalt Breastfeeding Program, and the Parent Hub, plus many additional resources. We are no longer selling these products separately, but as an all-in-one plus much more membership through Milk & Moon.) If you wish, you can refer to an NDC accredited practitioner. Free videos and other resources for parents with babies are available here, and online parent peer support is available for a nominal fee (also now available inside Milk & Moon). Pam is a Senior Lecturer with the Primary Care Clinical Unit, The University of Queensland, and Adjunct Associate Professor, School of Nursing and Midwifery, Griffith University. She is author of The discontented little baby book: all you need to know about feeds, sleep and crying.

14.        Zizzo G, Rumbold AR, Grzeskowiak LE. ‘Fear of stopping’ vs ‘wanting to get off the medication’: exploring women’s experiences of using domperidone as a galactagogue – a qualitative study. International Breastfeeding Journal. 2021;16:92.

This article was first published in The Medical Republic.